issue 3: in a fantastic world 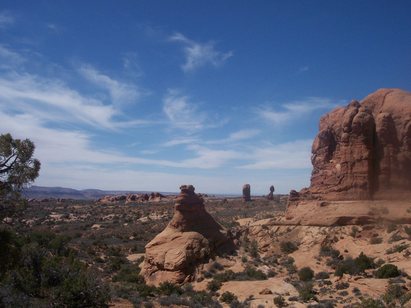 We often read or see strange and alien places in our media. They fire our imaginations and make us pine for these fantastical realms. Oh, if only we could explore The Lonely Mountain or visit the deserts of Dorne. But our little blue marble has plenty of surreal, beautiful places of its own. Arches and Canyonlands, two national parks out in Utah, fit that description quite well. Arches is an alien landscape, similar to what John Carter found on Mars, with its high cliffs that look like sword hilts plunged into the ground. Canyonlands is a vast expanse that will reinforce your thoughts of adventure. What is beyond that horizon at the far end of that endless canyon? 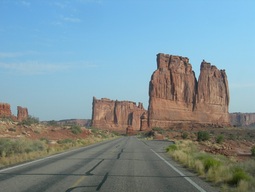 At least the scenery never disappoints!
How To Get There
If you're in Utah, chances are you're either there for sightseeing or you're a Mormon. Once you're there, you need to rent a car ASAP and then drive down to Moab. From there, you can easily get to either Arches or Canyonlands. You must drive around the park, the distance between many trails is too far to walk and still have daylight to explore.

As with everywhere except for a few major cities, if you want to travel in the US, you must have a car. Sorry. 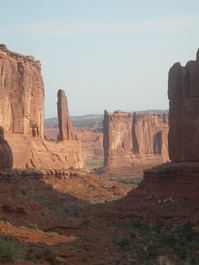 On a good day, the deep oranges and greens will really pop against the blue sky. Sunrise and sunset pictures can turn out fantastic, just check your angles to get some cool, long shadows from the surreal landscape. Playing with some of your color settings can help bring out the orange, but natural light is always best.
The sheer scale of Canyonlands is hard to capture, try for a panorama shot or piece together your own pictures.

Wallet Roll
Both parks will cost a little bit of money to get into. The real cost, however, comes from the gas and food of getting to such an out of the way place. Moab is a hippie outdoorsy town, but priced like yuppie ville.

Party Time
The Park Rangers would ask you not to throw down inside the parks, please. Moab caters to a more wild crowd and you might get invited to a bonfire out in the desert if you fall in with the right crowd.

What To Do
Go hiking, go sightseeing. Enjoy the bizarre, dream-like nature that you're seeing and revel in the fact that you get to experience it.

Just driving along the inside of Arches will reveal plenty of cool things to see. Parking at the edge of Canyonlands and walking out along the cliffside will provide you with some exceptionally cool pictures to make your acquaintances feel jealous.
If you're a movie buff, try and see the different landmarks in arches that have appeared in various movies. If you are more of an explorer, make your way to the bottom of Canyonlands and camp out somewhere. 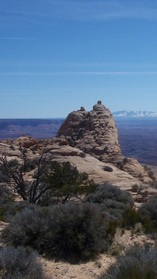 Don't fall off this
Jack's Misadventures
Ol Jack has been to these places a few times. Once, he climbed up a short cliff on the side of a larger cliff and almost fell off (don't be dumb like that, kids). Still, sometimes it's fun to take a little risk for a cool view or just to say 'I bet I can climb that'. At least until you say that for the last time. . .

Another time, he and Zap drove up to Arches all the way straight from Phoenix, Arizona. Jack drove all night while Zap snored in the passenger seat and dreamed of onions. It was a long trip to make, but he the timing was near perfect and ol' Jack then got to enjoy sunrise in his favorite US park. Not a bad way to begin an epic road trip. 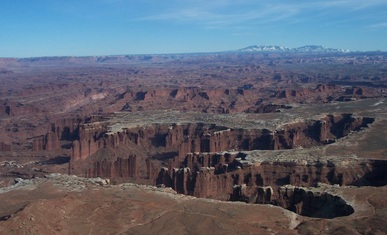 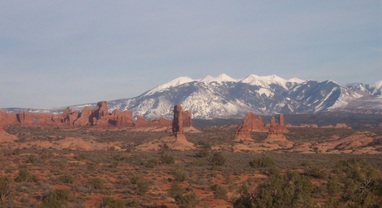 Adventuring
This area, especially using Moab as a base, has a TON of outdoor sports things to do. If you want to go ATV riding, mountain biking, parachuting, rafting, hard core hiking, or anything else you see in a Mountain Dew commercial.

The Seal Club
Since these parks rank among Jack's favorites in the whole entire world, it isn't a stretch to say that they both get the Official TWT Seal of Approval. If you are anywhere close to Utah, get out there and see them!
Travel Tip # 34: Never trust your taxi/tuk-tuk/rigshaw driver. Get your advice from other places.

Travel Well Traveled Thoughts While Dangling Your Feet Off A Cliff 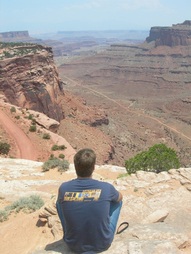 
The world is a vast and interesting place. Thanks to the internet, we now have a wealth of proof of this. It seems like every week there is a new collection of photos that 'you won't believe are real places!'. There are castles straight out of Disney movies, buildings that look like they came through a time warp from Blade Runner, and natural beauty that would look right at home being traipsed through with hobbits and elves.
I've walked with echoing steps through cathedrals with tall ceilings that were painted with stars. I've hiked through a decaying stone arch out in the middle of a lost forest, the moss growing thick and making it appear as if it was a portal to a past world. I've been to a temple that sits atop the ocean, where water follows you along open hallways, threatening to spill over into the worship areas. And I've been to natural places with cascading waterfalls so massive they stretched out of sight and deadly deserts so dry and quiet they seemed like a picture rather than a real place.

It's surprisingly easy to find these amazing places, these should-be-fictional places. They are scattered all across a great landscape, I know, but they are legion. Whatever continent you're presently on, whatever mighty city or podunk town you're currently setting down roots, I promise there is a breathtaking example within traveling distance.
For myself, there have been to many it would turn this essay into a short novel to talk about them all here, but let me give you just a few that spring to mind.

The Redwood Preserve: these absolutely enormous trees are already something out of our collective imaginations. Seeing them in person, trailing your palm around their trunk base and marveling at how long it takes to walk the outside, will help the reality sink it. I remember seeing a tree that had been shattered by lighting, split, and topple onto another. It had split the other tree down the middle, but come to a rest thirty feet above the ground, just jutting out like some enormous gun turret. And those aren't even the trees so huge that you can drive a car through an tunnel cut into their trunks!

Himeji Castle: Well away from a lot of international tourist traffic in Japan, this place is like something out of an anime. It's a massive castle painted white and black, built atop a lonely hill. Sometimes it's surrounded by glowing, pink cherry blossom trees. Sitting against a sunset or the blue sky, it looks like something from a painting, not reality. Just walking around its outer walls, I was struck with imagining how it must have looked to people so long ago, appearing invincible and beautiful among the low buildings around it.

Angkor Wat: A place many have heard of, but few realize the sheer size of these ruins. The buildings themselves are like mazes of ancient stones with intermittent light from narrow windows or a few lighted candles. The ruins are spread out, though, and while you visit some built atop a lake, others that are crumbling in the heat, some with dozens of carved faces watching your movement, or some with trees growing through the stones, you start to fall into the ancient, mysterious world that birthed them. You feel like Indiana Jones, searching for relics amongst a jungle ruin and don't we all want to feel like that?

Ponte Vecchio Bridge: Florence is a gorgeous city as most of the famous Italian cities are. This bridge, though, really hit me in the gut. It's like something you'd find illustrated between the pages of a fantasy novel. It would look right at home beckoning a group of wandering heroes into the merchant's quarter or as a setting for a steampunk showdown. The bridge is at once beautiful and cluttered. It appears that culture and architecture has somehow overgrown the moorings like a human-inspired vine.

Macchu Picchu: The moniker of 'city in the clouds' is not thrown around idly. When looking out over the vast expanse of these ruins you will routinely see clouds clutch and pull theselves arounding the surrounding shield of mountains. Heavy rain clouds will attempt the climb and be repulsed, kept away as if by the magic of the searching sun that itself must peak out between the jagged cliffs twice a day.

Arches and Canyonlands: Of course these heroes of this issue qualify. I've already talked about both, but they just make me feel like I'm truly experiencing America, experiencing life when I'm there. The alien, somewhat claustrophobic jaggedness of Arches is a striking contrast with the ridiculous openness and sprawl of Canyonlands. And yet, they are complimentary somehow. They both seem like places a little too grand to exist in this bland ol' world. Then I remember that it's really not bland at all.

It turns out that the really real world really is full of desktop wallpaper quality sights to discover. You just have to get out there and find them yourself. Don't trust the computer images (HD 7 billion pixels, 3-d enhanced), the written testimonies, or even video (even my own website), you need to experience some of these places for yourself. Each one is a pilgrimage of your own expectations.

Travel Tip # 108: You really won't sink in the dead sea, but you will cut your feet up. Bring beach shoes.

Arch-enemy of the Norm

Since Jack's always been a sci-fi and fantasy kind'a guy, he really liked the strange, almost alien quality of the landscape in Arches.  It felt like being plunked down in a strange fantasy world or off on a distant planet, fighting low-budget lizards with Captain Kirk.

Both Land and Canyon

I can land?  Can you?  Ha, just a little zany humor of the vast plains and fields that make up seemingly 99% of Utah.  Canyonland's Grand View lives up to its name.  Zap was rather thunderstruck ('zapped' if you will) upon encountering it.  It was all Jack could do to drag her away with promises of his world famous stew.  There is a switch-back riddled road you can take to the bottom of Canyonlands, but we've never had time to try it out.  If you are one of those teeny tiny cars I spied in the distance please let me know.  We were pretending to be Godzilla and crushing you with our fingers in the foreground.

Where something pretty big slammed into the Earth.  The dome is all the stuff pushed to the surface from far beneath (which is why it's not the same red-orange as the rest of the rock).  Just knowing that there was such a cataclysm and standing in its aftermath is a heady thought.

Remember, for more videos, 30 Seconds of Zen, and time lapse photography go over this way.

Can You Land that Arch? 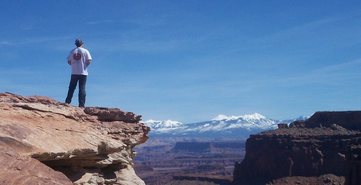 Why not get out to a place that will make you feel like you're living an adventure, forging a new frontier?  That's why these two parks are to me.  They are a throwback to that exciting daydream of youth when you imagine stepping foot on an alien world or discovering a new land on the far side of that mountainous horizon.

Get your ass to Mars?  Eh, just get it to Arches and Canyonlands.
Powered by