issue 22: bring me a hagia love

Istanbul, Turkey
'A million monkeys took 5 years to write this' 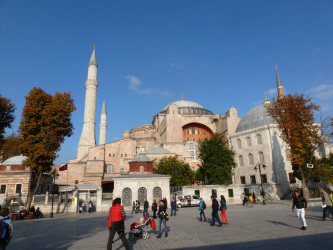 Excogitate Jack has found that the Hagia Sophia is one of those places we all know the name to, but we can't really describe it. When Jack found himself in Istanbul, there were a regular bevy of pretty architecture to sup from, but the Hagia Sophia dominated both the tourism books and the immediate skyline. The building is massive. There is plenty of detail inside, but once you realize that this cavernous, gorgeous building has been around for 1,500 years or so, you will just have to breath a quick whisper of 'Holeee shite'.

In other words, it's quite impressive. 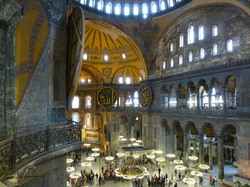 Get up top and get the shot!
What to Do
For starters, be prepared to wait in a line for a bit. This is a popular destination. Once you're inside, the main hall is both crowded and spacious with a mass of people on the ground floor and an enormous, vaulted ceiling rising above you.
Be sure to take in the sights from all the different places: head upstairs, walk around the entirety of the ground floor (stick to the edges if you want smaller crowds), walk the outdoor grounds, and walk a bit away in the city to see it in profile with the skyline. The HS is a marvel to see so make sure you take your time.
The only thing to really do here is take plenty of pictures and maybe listen to some history from a tour. Just feel amazed that human beings were able to build this all those years ago.

Getting Away From the Crowds

One of the first things Jack noticed was that the ground floor of the HS is PACKED. Like nearly shoulder-shoulder. All the tour groups seem to congregrate and congeal down there so do yourself a favor and hoof it up the nearby stairs to the second floor (which is basically a wraparound balcony).
Once you've had your fill of photos and people watching from the second floor, go explore some of the corners that, while are certainly not unpopulated, at least aren't stuffed with people like a Seoul subway.

I found some great, faded murals up top, along with some nice railings to set the camera on for some stabilized shots of the main hall. HS is so huge, though, that you'll need a very wide lens to fit it all in a single frame.
However, when you feel up to the challenge, head down to that crowded ground floor and just look up. Worth it. 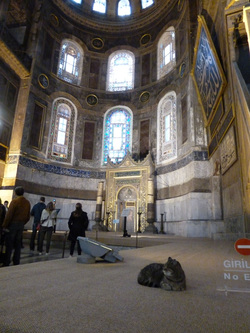 This is the Cat Pope waiting to address the masses.
Party Time?

This is a crowded, historic and holy place. No PDA, please. The HS is in the middle of the city, though, so there are plenty of places nearby to go out or meet some other ships passing in the night.
The HS is actually a great place for couple shots and couples selfies, so do that!

The entrance isn't all that much, compared to other famous sites you'll visit. Again, I recommend going on your own rather than with a tour; it's not like it's very confusing to get to and around. Afterward, there are plenty of little tourists traps just dying to pawn off some souvenirs on you.

Getting Around
This is one easy building to find. It's huge and the only thing that might make it confusing to get to is that it's located near other huge buildings. If you're on a tour, you will be dropped off in a big bus, but it is easily walkable from the center of the historic district so I'd say you should find your own way there as it's cheaper and you can stay longer. 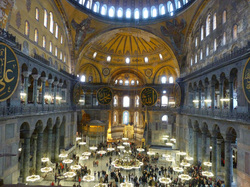 Sweet, sweet desktop wallpapers like this.
Jack's Misadventures
Although waiting in that long line was a pain, the true cautions about the HS would be possible pickpockets (didn't seem very common) and the 'my friend' men who will attempt to con you into getting into a taxi with them only to rob you blind (or worse) a short while later.
See the travel essay for a further explanation and advice on such nefarious ambassadors.

Even though HS is very well lit, it's worth it to bring a stabilizing tripod to get high-res shots of the lights, tiles, etc. There are a million fine details to see in the walls and high, domed ceiling.

Head to the ground floor and take a panorama looking straight up. Get macro shots of the mosaic tiles! Time lapse the crowds!

The Seal Club
If you're in Istanbul (not that other name), then you must go here. It's easy to find, photogenic, and worth the lines.
Travel Tip #93: Negotiate private tour prices. If your guide is amazing you can always give him/her a hefty tip later.

I'm About To Rob You, My Friend

ExJack has a standing policy that his mistrust in stranger grows by leaps and bounds whenever they use the phrase 'my friend'. Yes, he knows that this is a cultural thing, but people seem to forget that it has nothing to do with being friendly. It is used to attempt to set you at ease while your new 'friend' gouges you on prices at his shop or, more seriously, tries to lead you into a very literal trap.

Perhaps because it is especially egregious to misuse the word like this, that's what gets my back up like a cat on a hot tent roof. You know, like you're camping with your cat in Death Valley (future TWT issue).

Anyway, my experience with this bit of nonsense outside of the many, many shop keepers was with a mustached man who approached me while I was taking night shots of The Hagia Sophia and The Blue Mosque. Walking right up to me, the man started chatting me up (what are you doing here? where are you from? etc.). Now, even if you are a seasoned traveler, you have probably been to plenty of places where strangers will genuinely be curious enough to wonder about all that.
However, not only was Jack well seasoned when it came to getting ripped off, he also had a very savvy and helpful hostel owner actually lay out the Istanbul guidelines on a whiteboard. Among them was to never, ever get into a taxi with one of these conmen. My own personal version of 'The Sting' was that this guy kept trying to get me to go to a 'fun bar' which he knew about. We just had to take a taxi to a different part of town.

Since I'd met a great group of folks at my hostel I was curious to find some actual, fun bars so I decided to play along and pump the guy for useful info. It was like something out of a sitcom: this conman was practically salivating with the idea that he was tricking me into heading to his ambush and I kept stalling, attempting to get him to give me actual information on the parts of town with actual bars, etc.

If I had gotten into the taxi with him, he would have taken me to a dingy, underground 'bar' where I would be served some terrible beer or local wine. Then I would be charged a hundred dollars or so. If you object to that bill then some big, scary guys step out of the shadows and help you find your wallet.

Long story short, I did not get into the taxi with him and nor did I get any useful info about where to go. It was interesting to note, though, that he became very pushy when I made to leave. I can see how many more timid, kind-hearted travelers would feel pressured into going with their new 'friend'. This is what I find particularly galling, not just about the practice but the strange anti-hero worship that people have for thieves and conmen in the media. I would suggest that most people that think such characters are charming or daring have never met the genuine articles.
Like so many things in life, actual conmen and thieves are often greasy, rather poorly dressed types that ooze through their place in the world based upon the ballysness of being willing to screw over the rest of the fish trying to swim upstream. We got a society working pretty well and these a-holes show up to try and grab the silverware and run out the front door.

So, I don't trust anyone who refers to me as a friend when I only discovered they existed about ten seconds ago.

With all that being said, ExJack thinks The Sting is a great movie. I mean, Redford, Newman and Shaw?

Also, to end on a positive note so it doesn't sound like I'm dumping on Istanbul. The owner of my hostel, Ali, was a great guy. Not only was he always there with friendly advice, but I heard from other travelers what he'd done for a Western guest who probably didn't deserve it. Apparently, some girl from CanAmerBrit (?) stayed in the hostel for a month and then, the night before she was to check out and pay her bill, she tried to sneak out the second story window. She fell, broke her leg in the street and Ali took her to the hospital and paid her bill.
Ali was a good guy who hung out with us every night and never once referred to any of his guests as 'my friend'.
Travel Tip #56: Angles, lighting, & framing make all the difference in photos. You have a huge memory card, right? Practice.

Although the domed ceiling gets all the press (rightly so), the outside of the basilica has some interesting sights, though the architecture and your photos will be dominated by that greedy dome.  One problem is that the Hagia Sophia is so huge, it's actually hard to get a shot of it from the outside without either having to back up so far it's obscured by power lines and other modern inconveniences.  There are plenty of places to sit and relax/have lunch though and you can also take a gander at the gorgeous Blue Mosque just a stone's throw away (and often confused for the HS).

Now, if Stephen King wrote a story where everyone was trapped in the Hagia Sophia that would be very interesting.  Inside the basilica, you will be constantly awestruck at just how massive and cavernous the room is, yet how it is also just packed to the brim with minute decorations.  Everywhere you look, there are mosaic masterpieces, little carved corners, pillars, columns, arches, and stained glass windows.  It truly is an amazing sight.

Remember, to see uncut videos, time lapse photography and 30 Seconds of Zen, head on over to the video section! 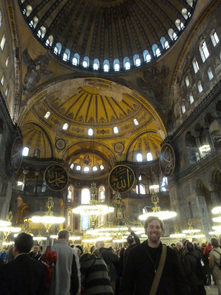 The Hagia Sophia is one of those places that doesn't disappoint.  In fact, since it gets so much less press than the Colosseum, The Great Wall, Notre Dame, etc.  you might be really surprised at how impressive it all as.  Jack certainly was.  Istanbul is a fascinating city all on its own, sitting at the cusp of a half dozen civilizations and with it's own unique culture.  The basilica plays into the grand history of the rest of the city with its mixture of styles, shapes, and sizes.

Jack would love to go back to Istanbul again someday and take some travel virgins inside the Sophia just to see the looks on their faces once they realize where they're standing.
Powered by